A message to the creative community.

As liberalism got liberally spread through societal channels the accepted ‘norm’ shifted and gave us gay marriage, trans-rights, paralympian role models and a host of other progressive symbols that conservatives of all persuasions would previously have laughed off the table.

The western world got its rock ’n’ roll on, or if you believe in actual progress… we made some.

But the ‘dark’ never really went away, and as the Left got intersectional it took its eye off the ball, and its victories for granted. The bogeyman crept in the back door and placed a bite mark on the ass of history.

…If you accept that particular narrative.

And there have been many since The Donald stepped into the limelight.

In a different world view, out-sourcing collapsed manufacturing communities, government-driven austerity drove families to food banks, pension pots became worthless and a cultural identity that many saw as the bedrock of their personal and communal life became blurred by an unregulated influx of the ‘other’. In that wintry perception something hadda give… The ‘prole’ got angry, but this is not the proletariat of Marx and Engels, this is a different aspirational class who own homes and iPhones, and take their broadband fast…

Narratives vary, but are increasingly optional.

Whatever narratives become the retrospective norm, there’ll be someone somewhere who disagrees, even more so if that ‘norm’ parades itself self-righteously. You may decide Trump voters are blinkered or bigoted or just plain barmy, but calling them ‘fascist’ or ‘stupid’ will not gain any ground. It’ll just divide in a time when ‘divide and rule’ is an opportunist mantra.

The world got Trumped and we gotta deal with it.

Trump reminds me of Jarry’s Ubu Le Roi. Except this is not the 19th century. Nor is it the 30s, and calling him a Nazi is not particularly helpful, or even true. It also disrespects those who suffered at the hands of actual Nazis.

Will Self used the term “opportunist” which feels entirely right. Trump appears politically ambivalent, a person who doesn’t wear the actual hallmark of left or right. He talks a right agenda because it suits him currently. In different circumstances he would have worn Democrat blue and talked ‘diversity’. He’s as much a product of the market forces he celebrates as he is a manifestation of the neoliberal globalisation he now disavows. This makes him confusing but not confused. If all you really care about is power and money you’ll do and say whatever is needed to get them. Trump is having a laugh as much at the American Christian Right as the rest of us, and, for now at least, he’s getting away with it.

Maybe. But it’s better than banging on confusedly about these ‘weird times’ and crying into your Guinness about 2016 being the ‘worst year ever’. Never heard of plague, killer flu and two World Wars..?

Big change has been coming.

Since the birth of networks, to be precise.

‘New Times’ have always shown up. Like feudalism was once new, or a capitalism borne out of the industrial revolution was new. They changed the world, but slowly, over centuries. Historical societal change used to happen in slow motion and was discussed later, in class.

Today change happens by the decade. Very soon it’ll become an annual event because technology borne on the winds of human desire and creativity is bootstrapping us into a future that is barely imaginable. Let’s call it what it is: the unknown.

Previous generations had the dubious luxury of having some idea about what their offspring might face during their lifetimes. That luxury isn’t just removing itself from the futures of our unborn, but our own futures too. Without a shadow of a doubt, in ten years time things will be very different. And what about the ten after that..?

Even that position neglects the three main challenges our future selves face: the disintegration and/or rewiring of globalised capitalism, climate change and an ageing demographic.

These are accelerating times and maybe we didn’t disappear down any rabbit hole or enter the Twilight Zone. Maybe this place we call home was always a bit of a Twilight Zone and it’s just taken speeded up change to open our eyes to our inherent resistance to change.

This is 2017. We’re still feeling the birth pangs of the new century, and I suspect there’s a whole lot more ‘weirdness’ to come, but I take comfort in that because impossible things happen in impossible times, and I’m an optimist.

In Trump and in the emerging Right we have an enemy that is now in plain sight. But we need a better understanding of what ‘enemy’ actually means because it’s becoming clear that we’re talking about an ‘enemy’ within. When a networked world reveals our differences it also reveals our similarities, and when idealogical fault lines appear within actual families, as happened with Brexit, it’s less a time to trade insults than a time to discuss those differences with a new depth we never previously have done.

Many won’t. Many will say this is a battle between good and evil, right and wrong (forgotten your Nietzsche?), left and right, and abrogate responsibility to a movement or religion or some other belief system that tallies with their definition of themselves and the greater good.

But artists and creatives have always been better than that…

Diversity doesn’t just happen in our neighbourhood. Diversity is what we are fundamentally about, and personal creativity is our measured response. It’s our real, radical call-to-action, because a creative mind never settles, it evolves. If we take just one thing from post-modernity, let it be fluidity. Not the inverse bigotry of a fluidity made ‘law’ of so-called social justice warriors—a fetishisation of difference—but fluidity made mind, an actual engagement with difference-as-potential.

I don’t think simple dichotomies generally work but in this case there are two types of people in the world. Creative types and non-creative types, and we are (mostly) all of both types. The daily choice we have is which side of ourselves we decide to engage.

Creativity is no longer about art galleries and fringe movements. It’s about action and response at a human level, and in our increasingly hyper-networked world, the opportunity for the mobilisation of like and unlike minds, via creative interaction, is an opportunity we’re now compelled to grasp.

Or you could join a Facebook group… but hey, confirmation bias has been exposed, so accept the challenge that brings, because there’s hope in weirdness, and anyhow…

The dark was always more sexy. 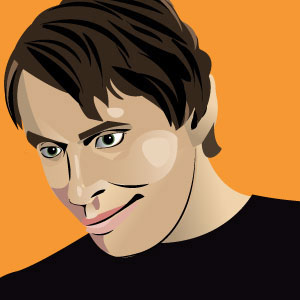